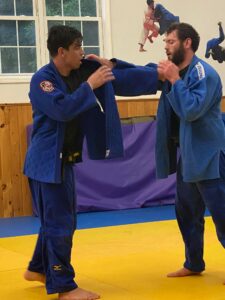 In the photo here you see Junior locking horns with Kell Berliner an Atlanta native ranked 101 on the International Judo Federation World Roster in the -81kg division.  Kell relocated years ago to Glenville, NY to train under the guidance of Jason and Teri with aspirations of making the 2024 US Judo Olympic Team.

At the time of this writing Jason and Teri have helped 3 US Athletes qualify for the Olympic Games along with producing an impressive 133 Medalists and 41 Champions at the US Senior Nationals in its 20-year history.  Jason and Teri have athletes from all over the United States relocate to Glenville with high hopes of making it big on the world circuit.

Head Instructor of North Jersey Judo Ramon Hernandez Senior ships his son Up-State NY on a weekly basis now-a-days to get the rounds and the guidance he needs to make his own mark.  We’ve formed a strategic partnership with the best in the business to help Junior get the training, tutelage and experience to be competitive here in the US and beyond.  We also bring it home to North Jersey Judo to help prepare our other members on what is working today in Judo competition.  We are lucky to have Jason and Teri only two hours away.  They foster the right environment to help these athletes get ahead.

Junior will be spending the week of July 12th at a camp held by Jason and Teri at their facility to help prepare Junior for the 2021 US Judo Open being held in Orlando, Florida in the end of July.